Here, battle could be about fish or drugs 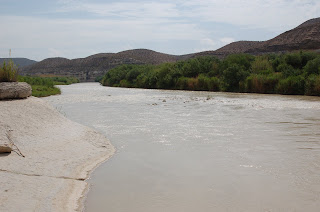 It's just something to do, said one user in a recent report of how Americans are becoming virtual deputies helping police the U.S-Mexico border.

I have lived on that border for almost a year now and didn't know this www.BlueServo.net existed until I read a CNN.com report with a pithy headline that changed at least twice during the course of my morning and afternoon news scans.

People with an Internet connection can patrol the border from the comfort of their home on the network. With an e-mail address, I signed up for the service. There are 11 cameras along the border, but none indicates their location. The Web site is project of the Texas Border Sheriff's Coalition. It includes 20 counties, including mine Val Verde.

Two of the people interviewed for the CNN report are far removed from the border – New York and North Carolina. I know from personal experience that North Carolina is far removed, because that's where I lived before settling in Del Rio, Texas.

It's more than just a difference in terrain. There is a contrast, of course, Rockingham, North Carolina with its sand and pine trees vs. Del Rio with its desert shrub and prickly things. There is also a different in culture. Del Rio is a mixture of two cultures, two nations and in many cases – one people.

I arrived in Del Rio from the opposite end of the illegal immigration spectrum. In North Carolina and my native Georgia, I saw migrant workers (many from Mexico and South America) living in the community to work on poultry farms or in the processing plants and in apple orchards.

Del Rio is on the front line. The Rio Grande River or a canyon cliff may define the border between the U.S. and Mexico. No line shows the border. No magic lines like alert the authorities that people are crossing illegally into the United States.

There are plenty of authorities here as the U.S. Border Patrol's Web site states the Del Rio Sector has 1,000 Border Patrol agents. The Del Rio sector covers 41 counties. The earliest agents patrolled the border in 1924.

Today, there are checkpoints along the main highways. You cannot leave Val Verde County without being stopped at a Border Patrol checkpoint. You are in the United States and you will be asked, "Are you a U.S. citizen?" Sometimes, you will be asked, "Where are you going?" They look in your car. A drug dog circles your car. This is life on the border.

People, who cross illegally, don't walk across the official ports of entry or the checkpoints. They cross the Rio Grande River; traverse desert shrubs and canyons; and escape rattlesnakes and prickly, dry terrain to make it into the interior of the United States. They aim for an Interstate, a railroad car or a friendly driver, who will take them away from the border.

Recent hearings in Washington drew a lot of attention last week about violence on the border. It does exist. The buzz on the network and cable news stations is not all hype. Here in Del Rio, we like to believe they are talking about somewhere else.

We had a battle here last week (March 12 to 15), but it involved anglers, not warring drug lords. The ESPN Bassmaster Elite Series Battle on the Border attracted thousands of anglers and spectators to the area to see what bass were hiding in Lake Amistad.

I'm not naïve to believe the drug lords took the weekend off. I would bet plenty of drugs were found in Del Rio while the tournament was under way. I have heard plenty of stories about drug runners entering bass competitions as a ruse to cross into Mexico and bring drugs to shore unnoticed. The drug runners try to blend in with the other anglers. Who knows how many have succeeded? All the stories I hear happily involve an arrest.

All the noise from Washington is being heard. Relatives ask, "So, how bad is it where you are?" I shoot back, "Del Rio uses the slogan: Best of the Border." I think we have a nice city. Our sister city of Acuña is hurting, because tourist traffic and regular visits from Del Rioans appears to be down.

It would be helpful if the discussions in Washington could be a little more specific (or at least the news reports). What cities need American troops? What about all the technology invested to monitor the border? Oh, and those million dollar fences, what about them?

The Border Patrol probably needs more people to patrol the borders. In July 2008, I spent a day with an agent in Comstock. It was interesting to see what an agents' day is like. I attended a Border Patrol citizen's academy several months before and a day in the field cemented my admiration for the work these men and women do. Oh, I still get my feathers ruffled when asked, "Where are you going?" at a Border Patrol checkpoint. This is America, I think to myself; but I never give the agents grief. I provide them with answers and continue on my way.

I hope attention on the border will highlight some of the unique aspects of our community. I do feel hometown pride and like to think we are the Best of the Border. I hope we can stay this way without troops on our border, because afterall, I am in America.

This photo is of a crossing point along the Rio Grande River in Val Verde County, Texas.
Posted by Stacy S. Jensen at 2:15 PM

Comment moderation is enabled. This blog is now maintained at
stacysjensen.com.