Let's hope for a happy ending 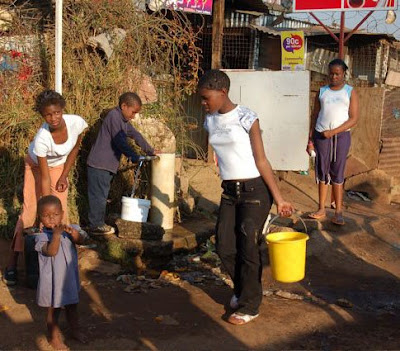 While I sat among a handful of people watching Slumdog Millionaire, I worried about those children living among the mounds of trash. I know the story is fictional, but it's a reality that children live in slums there and – yes, here in the United States.

Despite one film class in college, I don't know the details of a great film. I just have my gut feeling. The flow of the story from young boys to young men, the music and the actors were wonderful. The real world isn't always as magical as a movie – especially one with a happy ending.

While golden Oscars landed in the hands of the film's creators, the slums in India remain the same. In fact, many people were upset by the portrayal. That's life. I'm from an area in North Georgia, where "hill people" were portrayed in a horrible light in Deliverance. What can you do, but shrug every time you hear something like "Bet, you can squeal like a pig."

Slumdog Millionaire didn't conjure up any American images of slums or tent cities (none that I've heard of yet), but it did remind me of a trip to a slum in South Africa during a trip there in June 2006. The Soweto shantytown is well known in Johannesburg. We were supposed to "enjoy" the day at a luxury hotel that had champagne waiting in our rooms. The group I traveled with all agreed – we wanted to see the slums.

Another movie played into my impression of the Soweto slum. I had watched Tsotsi on the plane to Cape Town. The movie was violent, horrible and human all in one. It was hard to watch and more difficult to understand. The main thug in Tsotsi killed a woman, stole her car and found her baby. He decided to keep the baby.

I thankfully saw no thugs while in Soweto, but our tour guide arranged for a peaceful tour of the slums. I felt bad to be a gawking American tourist, but I still went. Encouraged to look around and ask questions, the slum tour guide told us tourists help the families they visit. The guide, the families and the vendors at the entrance all make a buck.

The shacks of corrugated metal were very tidy. Several families shared mini-compounds in the slums that were separated by barbed wire and fences. Vehicles were sometimes wedged into the fences. A clean white shirt hung in one compound. It was odd to see such a vibrant shirt – that made my own tourist clothes look dingy – among dusty streets.

The pot-holed, dusty streets were filled with children walking into the interiors of their neighborhood to their homes. There was a Mercedes parked next to a shack, which serves as a convenience store of sorts in this slum, which houses several hundred thousand. We saw a single porta-john toilet. There were several dozen in the area to serve the hundreds of thousands of people. They were serviced every couple of weeks, our guide told us.

We visited one home where a mother and her baby welcomed us. The metal shack was decorated inside with posters along the walls. Materials were gathered on the street to build the homes, which were prized possessions.

A colorful daycare on the street was filled with small children. School-age children walked down the street in neat uniforms after a day of lessons. Other children and teens gathered near a spigot that was surrounded by trash. With buckets and pails, they collected water, which was hauled to their shacks.

We asked the slum tour guide lots of questions. Three boys posed for a picture. I thought it was innocent at first, but the guide told them to scram when he sees them asking for money from another couple in our group. "We don't allow that," he said. The tours were very strict – no tips to people on the street. We were allowed to give the mother and baby a gift for opening her home to us.

I returned to my hotel that evening to jump into a shower that was larger than the shack we visited in the slum. After watching Slumdog Millionaire, I returned to my home with all its modern amenities in Texas.

I understand many children around the world living in slums. I fear more American families will be homeless during this current crisis. A report released on March 10, reported 1 in 50 children in the United States faces homelessness. These figures from the National Center on family Homelessness were from 2005-06 data.

I can't imagine what those numbers will be this year. A news account of the report outlined the number of impacts homelessness has on children such as medical and emotional issues and poor school performance. It's difficult to do well in school, if you don't have a stable home life, much less a home or maybe a meal to eat?

I hope that these real life stories of homelessness will have a happy ending like in the movies. It's unrealistic, yes, but it's difficult to sleep when you think of all the misery around us – here and abroad.
Posted by Stacy S. Jensen at 10:48 PM

Email ThisBlogThis!Share to TwitterShare to FacebookShare to Pinterest
Labels: Life

Comment moderation is enabled. This blog is now maintained at
stacysjensen.com.