In case you missed it, Author Roni Loren shared an important tip — Bloggers Beware: You CAN Get Sued for Using Pics on Your Blog — My Story.  If you use photos on your blog, you need to check out her post.

If you think I'm trying to scare you, you are correct.

Loren, a romance writer, shares a valuable (and expensive) lesson after a photographer asked her to remove his photo and demanded compensation for its use.

Others who have shared Loren's story with some helpful hints about photo resources include:


What areas should you check on your blog? Guest posts. Blog hop badges. Anything you "just grabbed" from Google Images.

For my Perfect Picture Book Friday posts. I've been operating under the fair use idea that it's a review or criticism. Anyone have any thoughts about using an image of a copyrighted book cover? I'm all ears on this one.

Loren's story is a cautionary tale. If you have photos you are unsure about, remove them from your blog.

Gnome, gnome on the range 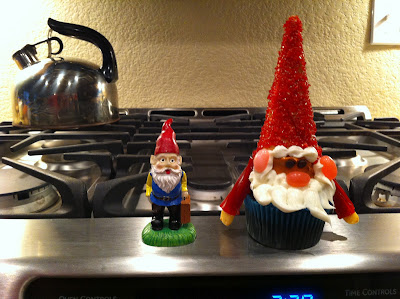 Am I traveling this summer to explain my absence? No. Just busy with school, homework and guests.

My sister, niece, nephew and parents visited this week. The time flew by too fast. I wrangled all the unwilling guests into making a cupcake gnome to match my sister's traveling gnome. The small gnome took in many Colorado Springs tourist sites then landed on our range ... "gnome, gnome on the range" before returning home.

I hope to return to a normal schedule soon, but am enjoying a summer of randomness.

Please grab a cupcake for yourself. Due to the lighting, one can't tell the "jersey shore" tanned skin tone. They won't last long as my son is a cupcake fiend. Enjoy your day.
Posted by Stacy S. Jensen at 2:51 PM 17 comments:

Small decisions can hang around.
My proof. A box holding a flower bulb. I fretted over this "favor" or small token of appreciation to give guests attending our wedding four years ago. Wedding websites offer a wide range of items in cuteness and price. Most were neither practical nor useful.

The bulbs worked well on the tables and most survived the trip home. We got married in Custer, South Dakota. Only two guests lived in the state. The rest of us arrived by car, plane or RV.

Andy and I killed ours flowers in the Texas heat, but received a gift of bulbs from my cousin Beth in Idaho when we settled in Colorado. Her wedding "favor" continues to bloom in her beautiful yard. We have a few in our yard now too. 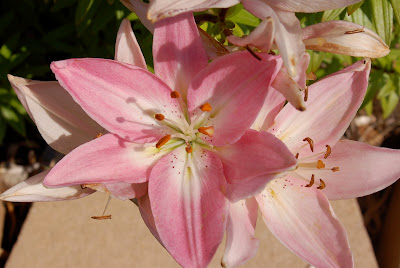 A few flowers found their way into my "watercolor" efforts for class.
The flowers gave me a break from trying to sketch another scene. They also provide a fun memory of our wedding every time I see them in the backyard. I remain thankful this little favor keeps giving each year.

What small decisions are hanging around in your life?
Posted by Stacy S. Jensen at 12:01 AM 12 comments:

I know. It sounds kinda dark. The blog is a little dark too — as in a black background with white letters. Most bloggers know that doesn't work all the time. When the topic is death, well, I say it does.

The Death Writer aka Pamela writes about death. She doesn't write about death in a creepy or gory way. Instead, she puts a very human touch on an unpleasant experience.

I found her blog during the book tour for Susan Oloier's book Fractured. The Death Writer shared her own experience of a miscarriage in this post Unspeakable Loss and talked about Susan's book. I needed that blog post, because several women around me had miscarriages in recent months.

In Pamela's about me she writes:


I blog about death, but don't let that scare you. I wrote my master's thesis on people who work with death and turned it into a memoir. I think talking about death is important. Heck, reading about it and then talking about it is cool too! Despite the scary death writer name, I'm a pretty funny gal.

Her blog schedule also illustrates a great niche blog. Her posts include Monday Mournings where she interviews people about how they dealt with death, Tuesday features a movie that has death in it and every other Wednesday features a writer, who has written about death, or a person, who deals with death in his or her profession.

I shared about Jimmy's death for this Monday Mournings: The Death of a Spouse post. It's an interesting series, because everyone is so different. If you ever write about death, The Death Writer's site is definitely a resource to investigate death issues and how people grieve.

I hope my friends in the United States had a wonderful Fourth of July. We enjoyed an evening without fireworks in Colorado. The Waldo Canyon Fire is 90 percent contained. A round of applause for the firefighters!

Our community was hard hit by this fire as two people died and 346 homes were destroyed. Are you Prepared? is a great post from the Writing From the Peak blog for the Pikes Peak Writers group. I never considered what work I would take or leave in an emergency until last week. It reminds me of how many picture book manuscripts I have written in longhand versus typing in a file I can store in the "cloud." Adding type manuscripts to my To Do list.

Let's see, I've talked about death and a devastating wildfire. Want to wow us with something fun? A napping cat video or a funny baby?
Posted by Stacy S. Jensen at 12:01 AM 13 comments: